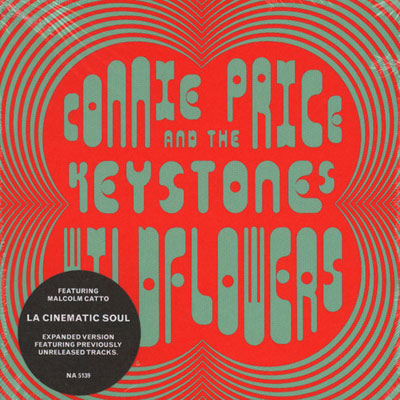 Connie Price and the Keystones are the Los Angeles musical group whose 7″ releases kick started the Now-Again label way back in 2002 – and whose Wildflowers album was the first full length release by a new band on the label. Way back then we called it “cinematic soul” and wouldn’t you know it – the originator of the style, Lalo Schifrin, himself agreed. Seriously. Read the quote. It’s real. (“Connie Price and the Keystones are to be praised for their originality and brilliance.” – Lalo Schifrin).

Wildflowers contained contributions by the Heliocentrics’ producer/drummer Malcolm Catto, original Funk Inc. organist Bobby Watley and Poets of Rhythm/Whitefield Brothers/Karl Hector & The Malcouns founder/guitarist Jay Whitefield. Now that Now-Again is the home to the previous ensembles and more (artist albums by Seu Jorge and Fabiano do Nascimento have come out on the label), it seemed fitting to revisit where it all started, with an expanded version of the album that kick started it all. Includes previously unreleased Malcolm Catto tracks and tracks previously only available on out of print vinyl.