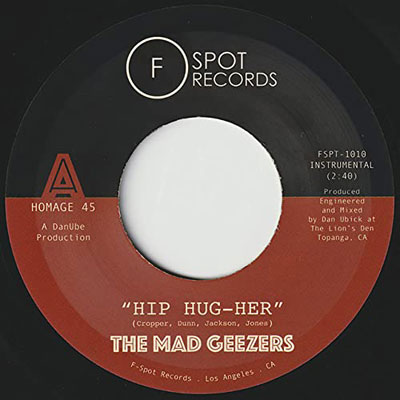 Hip Hug-Her / Girl of My Dreams

THE MAD GEEZERS are not just a band of seasoned veteran musicians, they are a concept; what would it sound like if Booker T & The MG’s were on tour in Jamaica in the late 60’s, decided to extend their stay and ended up soaking up the atmosphere and recording at Studio One? “Hip Hug-Her” b/w “Girl of My Dreams” frames that scenario perfectly adding Jamaican flavor to a Booker T & The MG’s classic while the B-side sounds like a long lost Sly & Robbie instrumental from a Gregory Isaacs session. THE MAD GEEZERS’ producer and guitar player DAN UBICK pulled in long time friends DAVE WILDER (Macy Gray, Ziggy Marley, The Lions) on bass and drummer OLIVER CHARLES and organist JASON YATES from Ben Harper & The Innocent Criminals to form a rock solid, funky and cinematic combo that brings together elements of American soul music with Jamaican reggae and dub flavors seamlessly.